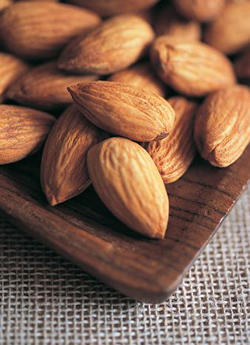 The first known references on almonds dating from the time of the Egyptians, which were regarded as a precious ingredient that was part of the breads that are served the pharaohs.

It is believed that the almond trees are native of southwest Asia and from there, through the Silk Road, merchants introduced almonds in Turkey, Greece and the Middle East.

The Romans extended its cultivation in Spain, and from there later came to America, concentrating its growth, today, in the regions of San Joaquin Valley and Sacramento in California, due to suitable climate that occurs in those areas.

In Spain they are gathered around a hundred different almond varieties, but among them we can distinguish three groups: Marcona, larguetas and comunas.

About almonds that Zaral matter, most of them come from California, United States being the largest producer of almonds in the world and the largest importer Spain Almond (vol TM), serving as a bridge to the rest of Europe.

almonds from other sources such as Australia, Chile, Greece and Turkey are also acquired.

It is the typical Mediterranean almond, and its undeniable properties of flavor, texture and quality, is a shining example among the remaining almonds grown in Spain.

For its nutritional qualities and its high fat content, this variety is very appreciated by turroneras industries, chocolate makers, pastry and confectionery, for the manufacture of candies, chocolates, sweets Christmas, etc.

This term encompasses a large number of varieties are grown throughout the country and for its sweet taste and its magnificent qualities, constitute an indispensable industries nougat, pastry, marzipan, ice cream and snacks raw material.

This variety is characterized by its elongated shape and its distinctive and pleasant flavor, giving it a prominent place among the nuts, being a very popular product for the production of chocolates, sweets, lozenges, quality chocolates and confectionery.

Its excellent taste, and the characteristic that once toast cut off his outer skin very easily, make the largueta roasted almond snack high quality.

California Almond is highly valued for its consistency, giving it an ideal property for use by industries pastry, chocolate and ice cream.

Processed almond have various applications in pastry and confectionery in general.

Almond meal is used as a raw material in the production of custards, marzipan, shortbread, etc.

Steaks, cubes or sticks and sprinkles are used as a decorative element in confectionery and bakery products such as tea biscuits, chocolates, ice cream, cakes and cookies.